When I was five years old, I saw a computer in our house for the first time. It was a BBC Micro Model B with 32K of RAM and a row of shiny red function keys. People of a certain age in the UK will likely remember it from their school as it had massive market penetration there. We entered commands from the manual to change the screen colours, and my mum laboriously typed in a program that made patterns zigzag back and forward. I was enthralled. This was what I wanted to know about. 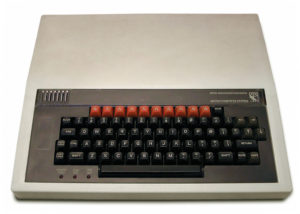 This is what the future looked like. It had an owl.

When I was eight I got more cool cachet than I had at possibly any other time in my life by successfully completing Granny’s Garden on the BBC Micro we had in primary school. For those who are unfamiliar with this game (and if you are, please watch this video), it was a late-80s-early-90s edutainment title featuring Teletext graphics, an unfathomably terrifying witch and some design sensibilities that would make Roberta Williams say “Blimey, that’s a bit arbitrary.” Most people had made it through the first couple of levels, and had seen me crack the logic puzzle with the dragons in world 3 (racist caricature notwithstanding) so they were catching up, but I was the person making the most headway in the final world, the Land of Mystery. This was my first Proper Adventure Game and should probably have put me off them for life, but somehow it didn’t, probably because we had a video splitter for the Beeb that let us plug it into the Big TV On A Trolley, and beating the game was an actual Event for everyone.

About that age onwards I started to write my own games on that same BBC Micro at home. I am in no way suggesting I was some sort of bedroom coding wunderkind; I did not produce Manic Miner or Dizzy. I wrote super-linear sequences-of-events in BASIC, largely based on the Children’s ITV show Knightmare (and to be fair I wasn’t the only one). It was a good format for something written in BASIC because the show was largely a long sequence of “Did you make the right choice? No? TOO BAD” and you could easily write a linear critical path and stop the program every time someone made a bad choice. I also wrote some platformers with ASCII graphics. The least said about those the better, although in the draft of this post I used the phrase “cargo-cult Mario” and I’m quite proud of that so it stays in.

When I was 16, after I finished my GCSEs, I had my first proper crack at writing a novel. I had decided at this point that programming was maybe not for me (moving up to trying to write games on PC had proven frustrating with the tools available in the mid-90s) and writing was the creative pursuit to go for. While I was, at least by the reckoning of my teachers, a pretty good writer, the novel itself was bloated and terrible and about what you’d expect from a 16-year-old attempting to write his first novel, but it did prove one thing: I could knock out the word count. I was pushing out five thousand words per day, in the way you can only do when you have no other cares in the world, which is an important thing to remember when you have a) cares and b) writer’s block. I could do it.

Shortly after that, I wrote a couple of very simple PC games in the middle of teaching a couple of semesters of an A-level Computing course. (I exaggerate there, but only slightly.) Computing is a more technical alternative to the business-focused Information Technology, and the first year was supposed to introduce basic programming principles, so everyone had to learn Borland Turbo Pascal. As such, the advanced nerds who were just learning a new programming language and not, say, what variables were and IF THEN ELSE ended up coaching everyone else and having a little time on their hands. Pascal has enough syntactic similarities to BASIC that I could immediately go looking up the commands I knew I needed to read keyboard inputs and do PRINT TAB and I was ready to go. My biggest success was a knockoff of a two player boxing game I remember from an old BBC type-in listing. It was not terrible apart from the ASCII art, and actually had recognisable gameplay. (Also spoiler alert: saying “oh this is multiplayer so we can play together in class” is an excellent excuse for not having to code any AI). It was sadly beaten in popularity by my friend Paul’s Mr T game where Mr T had to chase the jibber-jabberin’ fool round the screen and catch him. It was basically two moving stickmen on a blank screen but you could press T to make Mr T spout random catchphrases, which was enough to carry it with the 1998 equivalent of meme-obsessed teenagers.

When I was 19 I did a module in my English BA called Fabulous Beasts, which was about the use of animals and animalistic creatures in literature, whether they be symbolic, literal or anthropomorphic. Halfway through there was a call for submissions for reading week. The submissions bundle would form the basis of the next seminar, and everyone in the class was meant to find an appropriate short story or extract from a longer work, or explicitly thrown in at the end was “you can even write something for it yourself if you like”. This last was like a red rag to a bull and I set to work. Unfortunately working under explicit pressure has never produced what I consider to be my best work, or in fact anything other than writer’s block. I was distinctly unhappy with what I eventually pumped out, which was a short story about a dragon that kidnapped a writer. The world was too dangerous for dragons now; Man Is The Real Monster etc. so dragons were going to retreat into stories where they would be safe and immortal. I thought it was trite and cliché, done a million times before, pretty obviously rushed et cetera. In order to mask my involvement and give it an air of legitimacy, I typeset it so that it looked like it had been photocopied out of a book laid flat. I was expecting at best indifference and at worst a savaging, so I was pleasantly surprised when out of an hour-long seminar to deal with the reading bundle, one containing around twenty pieces, they spent literally half the session talking about the “unnamed dragon story” and talking about the themes and implications. Nobody seemed to notice it was an amateur rush job. (The lesson I took from this was, of course, not that maybe I’m better at this than I think, but that I could fool people into thinking I was better at this than I think.)

You may by now be wondering what this old nerd hagiography is about, especially as even the newest entries are nearly twenty years old. There is a purpose to it, even though everyone is really entitled to at least one personal hagiography on their own blog.

The first entry on this blog was intended to be a grand mission statement about how I needed to write a game in order to save my life; about how recent experiences had suggested to me that producing a creative work, any creative work was better than not doing so, because it was rapidly becoming clear that the consequences would be a lot more than just “not having made anything”. But that grand mission statement was proving as much of a giant stumbling block as anything else about the work. I realised after reading some stray tweets (that for the purposes of this I should really have bookmarked, because this bit falls a bit flat without being able to quote them) that the person I was most attempting to convince with that mission statement was me. Anyone else can just take whatever things I make and judge the work, but the “mission statement” seemed to be more of a pre-emptive attempt to say sorry for my failures. I should really see if I have some failures first.

Eventually I will tell the story of my declining mental health and the difficulties of working with brain fog and anxiety, and the wonderful and terrible weekend of AdventureX 2016, but perhaps what I need in order to get to a place where I can talk about those is to gain the confidence boost of actually making something, no matter how rubbish. Maybe I need to remind myself that I’m capable of doing this.

Let’s do that, then.