So I wrote that blog post that was stopping me doing any game design. I suppose I’d now better actually do some game design.

The goal at the moment is to make something self-contained, simple and achievable, because the right now the most important thing I can do is to actually finish something, produce a complete game rather than an ambitious “demo”. As such there are a couple of easy decisions to make. My “engine” of choice will be Twine, notable user-friendly scripting language for interactive fiction, as the most I will be expected to “code” is markup and some variables. A pure text adventure means I don’t have to produce any art assets or music, which is also handy. In addition, I spent pretty much all of my youth up to my eyeballs in Fighting Fantasy, Choose Your Own Adventure and every similar gamebook. I have pretty good handle on how “if you wish to go right, go to section 29”-style text adventures work structurally.

As to the subject, that’s quite easy as well. Those of you who were here for the previous instalment will remember me mentioning that some of the first games I ever wrote in BASIC were text adventures based on the 1980s-90s children’s gameshow Knightmare. There is a distinct possibility that in the year 2017 (!) people reading this may be unfamiliar with the format, so in short: a lone adventurer was thrust into a fantasy dungeon created by the magic of greenscreen, guided by three friends watching them on a monitor as nothing was actually there they were blindfolded by the magic Helmet of Justice. They had to be steered round perilous traps, deal with riddles, engage with the dungeons’ denizens and gnerally proceed through the levels to find the object of their quest.

Or, more likely, fail and die.

The show was notable for a) its pretty impressive production values – a lot of the show still holds up visually, especially the early seasons where all the dungeon backgrounds were hand-painted, and b) absolutely not fucking around. Winning teams were notoriously rare, with nobody winning at all in the show’s first season. They were quite happy to blow up, chop, electrocute or bludgeon their (ten-year-old) contestants, or send them plummeting into bottomless pits (at least when your advisors didn’t steer you down them of their own accord). The most memorable obstacle at deeper levels was a conveyor belt in a narrow corridor with circular sawblades that would rip down the walls, forcing the normally sedate movement pace to crank up a couple of gears. A modern viewer is likely to see some video game influence here, and that’s exactly the case. According to this excellent history of the show by creator and producer Tim Child, early 8-bit computer adventures served both to inspire and to help solve a lot of problems they were experiencing in the prototyping stage of the concept, such as basing all the rooms on a standardised grid format to make setting up the studio easier. (The famous on-screen Life Force clock, featuring the dungeoneer’s head where their helmet and eventually the flesh on their face slowly fell away piece by piece, was shamelessly lifted from Atic Atac.) 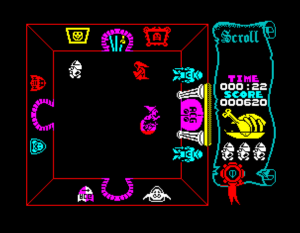 There are other elements of the show that make it hany for reverse-engineering the setup into a game I can make quickly:

The major risk is that a player/reader unfamiliar with the original show will see some of these are not attempts to reflect the conventions of the source but limitations in gameplay, but for my purpose here this is an acceptable risk. This project is meant to be for confidence-building, after all, not a retail release.

(Incidentally, while there were a number of Knightmare computer games, the format definitely works as interactive fiction. Each of the show’s tie-in novels, written by noted game designer Dave Morris, had an adventure gamebook section at the back, and they were frequent library loans for me.)

So what’s your structure?

The dungeons in Knightmare descended across three levels, which (after some early problems with the difficulty curve) settled out to a pretty fair beginner-intermediate-hard state. Level 1 was relatively forgiving (which meant less time introducing new teams, I guess), level 2 was tough and level 3 was genuinely no-takebacks murderous. Notmare Castle (please forgive me, I’ll need to find a better name eventually) will similarly have three levels with this kind of scaling. I want to set things up so that the player can “respawn” at the start of a level should they die; I don’t want to be quite as harsh as the show.

Each level is divided into a number of self-contained rooms, each with its own particular challenge, although consequences (such as knowledge gained or items collected) will carry across to the rest of the level. I’m going to pick five rooms as a good number here as it makes for some easy pacing (allowing a small challenge peak in the middle of each level, then a room’s respite before the final room) without the amount of content getting too intimidating to produce. We stick an antechamber at the start to do a little scene setting before you enter the dungeon proper, and teleport you back there should you win.

I obviously need a visual aid for this, and don’t worry, I’ve invested in the most high-tech setup possible: sticky notes.

At the time of writing it is National Stationery Week. This was not an excuse to buy rainbow sticky notes, I promise.

It should be fairly obvious how this works: each square on the grid is a room, and I just need to decide what goes in each room. Populating the map is the next goal. So what are we going to have inside it?

There are a number of specific items from the show I would like to put into this loving homage.

There are likely to be more, and I need to populate 15 rooms and think about some dramatic flow, but now is probably a good idea to end this post for today and have a lie down. I shall scribble on some more sticky notes at work, most likely.